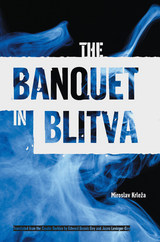 The Banquet in Blitva
by Miroslav Krleza
translated by Jasna Levinger-Goy and Edward Dennis Goy
Northwestern University Press, 2004
Paper: 978-0-8101-1862-1
Colonel Kristian Barutanski, overlord of the mythical Baltic nation of Blitva, has freed his country from foreign oppression and now governs with an iron fist. He is opposed by Niels Nielsen, a melancholy intellectual who hurls invective at the dictator and the hypocrisy and moral bankruptcy of society. Barutanski himself despises the sycophants beneath him and recognizes in Nielsen a genuine foe; but Nielsen, haunted by his own lapses of conscience, struggles to escape both the regime and the role of opposition leader that is thrust upon him.

Miroslav Krleza is considered one of the most important Central European authors of the twentieth century. In his career he was a poet, playwright, screenwriter, novelist, essayist, journalist, and travel writer. He also suffered condemnation as a leftist and a practitioner of modernism and his books were proscribed in the 1930s. The first two books of the trilogy The Banquet in Blitva were written in the thirties and their comments on political, psychological, artistic, and ethical issues earned him the enmity of Yugoslavia's increasingly fascist government. He did not write and publish the third book in the trilogy until 1962.
AUTHOR BIOGRAPHY
Miroslav Krleza (b. 1893) published many works, including The Return of Philip Latinowicz (1995), published by Northwestern University Press; On the Edge of Reason; and The Cricket Beneath the Waterfall and Other Stories. He died in Zagreb in 1981.

Edward Dennis Goy was a Cambridge University lecturer and an author. He translated with Jasna Levinger-Goy, Meša Selimovic's The Fortress, published by Northwestern University Press. He died in 2000.

Jasna Levinger-Goy, a university lecturer and an author, is the cotranslator of Emily Dickinson's Poezijia and Edward Dennis Goy's Sabja i pjesna.
TABLE OF CONTENTS

4. And Melancholy Can Burst from a Man Like Lava from a Volcano