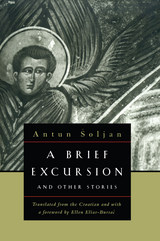 A Brief Excursion and Other Stories
by Antun Soljan
translated by Ellen Elias-Bursac
Northwestern University Press, 2000
Paper: 978-0-8101-1635-1
The novel A Brief Excursion anchors this collection of fiction by one of the most significant postwar Croatian writers. This novel and six stories, including many from Soljan's first book, Traitors, reveal a sensibility both comic and poignant, devoted to questions of identity and solidarity, of how the one and the many conflict and intermingle-issues that were at the center of both political and literary life for Soljan. Whether fixing up a summerhouse on the Istrian coast or confronting prejudice and the past in a tourist town, Soljan's characters are stirred to action by an undefined longing, only to find the stark landscape of self-knowledge and loss.
AUTHOR BIOGRAPHY
Ellen Elias-Bursać teaches in the Department of Slavic Languages and Literature at Harvard University and is co-chairman of the Southeast European Study Group at the Minda de Gunzburg Center for European Studies.

Antun Šoljan was born in Belgrade in 1932. Throughout his life he took an activist role in defining the tasks of the writer and the writer's relation to society. His politics, dissenting from the Communist line, made him persona non grata in public life from 1974 until his death in 1993, but his ideas and views became ubiquitous on the Croatian cultural scene. Šoljan's stature in Croatian literature and the popularity of his writing have prompted the translations of his novels, essays, poems, and plays into a growing number of languages.