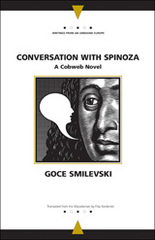 Prizing ideas above all else, radical thinker Baruch Spinoza left little behind in the way of personal facts and furnishings. But what of the tug of necessity, the urgings of the flesh, to which this genius philosopher (and grinder of lenses) might have been no more immune than the next man-or the next character, as Baruch Spinoza becomes in this intriguing novel by the remarkable young Macedonian author Goce Smilevski.

Smilevski's novel brings the thinker Spinoza and his inner life into conversation with the outer, all-too-real facts of his life and his day--from his connection to the Jewish community of Amsterdam, his excommunication in 1656, and the emergence of his philosophical system to his troubling feelings for his fourteen-year-old Latin teacher Clara Maria van den Enden and later his disciple Johannes Casearius. From this conversation there emerges a compelling and complex portrait of the life of an idea--and of a man who tries to live that idea.
AUTHOR BIOGRAPHY
Goce Smilevski was born in Skopje, Macedonia, in 1975 and is the author of three novels. In 2002, Conversation with Spinoza won the Macedonia National Novel of the Year Award.

Filip Korženski is an English teacher and professional translator who lives and works in his native Skopje, Macedonia.


A Note to the Reader
Thread One
Thread Two
Thread Three
Thread Four
Thread Five
Thread Six
The Center of the Cobweb
Instead of an Epilogue: Why Spinoza?