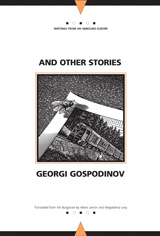 Wildly imaginative and endlessly entertaining, Georgi Gospodinov's short stories provide a hint of the narrative complexity of Borges and a whiff of the gritty realism of pre- and post-Communist life in Eastern Europe. These stories within stories and contemporary fables--whether a tongue-in-cheek crime story or the Christmas tale of  apig, a language game leading to an unexpected ephiphany or to an inward-looking tale built on the complexity of a puzzle box--come together in unique and surprising ways, offering readers a kaleidoscopic experience from one of Bulgaria's most critically acclaimed authors.
AUTHOR BIOGRAPHY
Georgi Gospodinov is a poet, fiction writer, playwright, and critic whose works include Natural Novel (Dalkey Archive, 2005), which has also been translated into French, Danish, Czech, Serbian, Slovenian, Croatian, and Macedonian.  He is a professor at the Institute of Literature at the Bulgarian Academy of Sciences and the editor of a weekly literary and cultural newspaper.  He lives in Sofia, Bulgaria.

Magdalena Levy is a freelance translator who has translated into Bulgarian more than forty books by authors such as Joanne Harris, Eoin Colfer, Susanna Clarke, Alberto Manguel, Yann Martel, Hélène Rioux, and Eric Bogosian. She lives in Sofia, Bulgaria with her husband, daughter, and son.
TABLE OF CONTENTS


Peonies and Forget-Me-Nots
A Second Story
Station Story
The Eighth Night
The Man of Many Names
First Steps
Christine Waving from the Train
On the Stealing of Stories
On the Taste of Names
The Late Gift
L.
The Christmas Soul of a Pig
The Nightmare of a Lady
A Fly in the Urinal
Forging the Bulgarian Earring
Blind Vaysha
The Third One
A Living Soul
One Last Tale of the Nineties
Gaustine
The White Pants of History