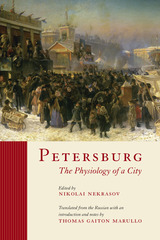 Petersburg: The Physiology of a City
translated by Thomas Gaiton Marullo
edited by Nikolai Nekrasov
Northwestern University Press, 2009
Paper: 978-0-8101-2573-5
This landmark collection of short works forms a vivid documentary of life in midnineteenth-century St. Petersburg. Editor Nikolai Nekrasov was the most influential literary entrepreneur of the day, and he assembled works ranging from ethnography to fiction to literary criticism, all written by leading authors and thinkers of the time. The book he edited represents many important strands in Russian culture and history, including the development of Russian prose and the rise of the intelligentsia. A vital political document as well, Petersburg is a record of—and served as a spur to—the changes in Russian society that culminated in the 1917 revolution. This first-ever English edition brings its storied and studied illumination to a new audience, providing a key to understanding the place that St. Petersburg holds in Russia’s identity.
AUTHOR BIOGRAPHY

Nikolai Nekrasov (1821-87) was a major poet, a literary entrepreneur, and a force for social reform in Russia. As a publisher, he introduced many of the great Russian writers—including Dostoevsky—and acted as a guiding spirit for the nation’s revolutionaries.

Thomas Gaiton Marullo is a professor of Russian and Russian literature at the University of Notre Dame. He is the author of If You See the Buddha: Studies in the Fiction of Ivan Bunin and the editor and translator of Ivan Bunin’s About Chekov: An Unfinished Symphony and The Liberation of Tolstoy: A Tale of Two Writers (all from Northwestern).