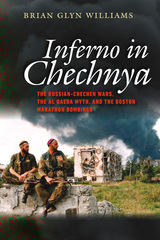 In 2013, the United States suffered its worst terrorist bombing since 9/11 at the annual running of the Boston Marathon. When the culprits turned out to be U.S. residents of Chechen descent, Americans were shocked and confused. Why would members of an obscure Russian minority group consider America their enemy? Inferno in Chechnya is the first book to answer this riddle by tracing the roots of the Boston attack to the Caucasus Mountains of southern Russia. Brian Glyn Williams describes the tragic history of the bombers’ war-devastated homeland—including tsarist conquest and two bloody wars with post-Soviet Russia that would lead to the rise of Vladimir Putin—showing how the conflict there influenced the rise of Europe’s deadliest homegrown terrorist network. He provides a historical account of the Chechens’ terror campaign in Russia, documents their growing links to Al Qaeda and radical Islam, and describes the plight of the Chechen diaspora that ultimately sent two Chechens to Boston. Inferno in Chechnya delivers a fascinating and deeply tragic story that has much to say about the historical and ethnic roots of modern terrorism.
AUTHOR BIOGRAPHY
BRIAN GLYN WILLIAMS is professor of Islamic history at the University of Massachusetts Dartmouth. He has published numerous books related to terrorism and conflict in Eurasia, including The Last Warlord: The Life and Legend of Dostum, the Afghan Warrior Who Led US Special Forces to Topple the Taliban Regime; Predators: The CIA’s Drone War on Al Qaeda; Afghanistan Declassified: A Guide to America’s Longest War; and The Crimean Tatars: From Soviet Genocide to Putin’s Conquest.
TABLE OF CONTENTS