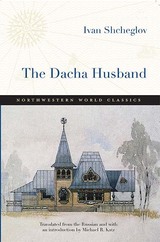 In addition to offering fresh editions of well-known works, Northwestern World Classics will also reintroduce to a new generation "lost classics," such as Ivan Shcheglov’s 1896 The Dacha Husband (Dachnyi muzh). Despite being considered the most interesting writer of the late 1800s by no less a writer than his onetime collaborator Anton Chekhov, Ivan Shcheglov is largely forgotten in the West. In the able hands of Michael Katz, acclaimed translator of Dostoevsky, Turgenev, and Tolstoy, Shcheglov’s strikingly modern style and biting satire come alive for today’s readers.

The Dacha Husband (a term created by Shcheglov) satirizes a type of man who came to prominence in the later part of the nineteenth century in Russia; he was typically upper middle class, was married to a materialistic woman, and commuted to work in St. Petersburg during the summer while his wife and children vacationed at the family’s dacha in Pavlovsk.

Among the novel’s highlights is a "Convention of Dacha Husbands," in which a "small group of insulted and injured husbands gathered together, in secret from their wives, . . . for a general discussion of contemporary marital misfortunes and a search for some means to protect their human rights." The convention is unexpectedly interrupted by the wives, who arrive to retrieve their rebellious spouses. A coda informs the reader that at least one of the proposals offered during the meeting survived: the construction of a "shelter for the care of deserted husbands."

"Ivan Shcheglov" was the nom de plume of a Russian army captain whose real name was Ivan Leont’evich Leont’ev (1856–1911). His writing career flourished in the 1880s, during which time he collaborated with Chekhov on a farce entitled The Power of Hypnotism, recently translated and published in Laurence Senelick’s edition of The Complete Plays: Anton Chekhov.

Michael R. Katz is the C. V. Starr Professor of Russian and East European Studies at Middlebury College. He has translated many novels from Russian, including Dostoevsky’s Notes from Underground and The Devils, and Turgenev’s Fathers and Children. He previously translated Polinka Saks by Aleksandr Druzhinin and Antonina by Evgeniya Tur for Northwestern University Press.