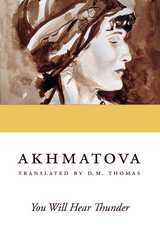 Anna Akhmatova (1889–1966) was part of that magnificent and in many ways tragic generation of Russian artists which came to first maturity before 1917, and which then had to come to terms with official discouragement and often persecution. As D.M. Thomas points out in his introduction, practically none of her poetry was published between 1923 and 1940. Her poetic range was wide, from the transparent anonymity of “Requiem” to the symphonic complexity of “Poem without a Hero.” She was revered and loved not only by the best of her fellow poets but by the ordinary people of Russia: five thousand mourners, mostly the young, crowded to her requiem mass in a Leningrad church.

You Will Hear Thunder brings together for the first time all D.M. Thomas’s translations of Anna Akhmatova’s poems. They were very highly praised on their separate appearances in 1976 and 1979. John Bayley called them “a mastery achievement,” and said of Thomas that “he has profound reverence and affection for the original;” while Donald David wrote that Thomas’s translation was “The first version to explain to me why Akhmatova was so much esteemed by those great poets, Pasternak and Mandelstam and Tsvetaeva.” It is good to have these powerful, noble and compassionate poems in one set of covers.