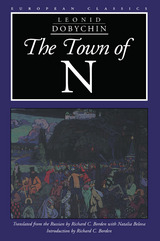 Northwestern University Press, 1998
Paper: 978-0-8101-1589-7
Leonid Dobychin's The Town of N, an unrecognized masterpiece of the Soviet 1930s, virtually vanished, together with its author, following its publication in 1935 and the subsequent vilification of Dobychin by Leningrad's cultural authorities. It portrays a fallen provincial world reminiscent of the town of N found in Gogol's Dead Souls, a place populated with characters who are petty, grasping, perfidious, and cruel, quite unlike the positive heroes of socialist realist novels.
TABLE OF CONTENTS