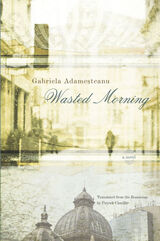 Wasted Morning: A Novel
by Gabriela Adamesteanu
translated by Patrick Camiller
Northwestern University Press, 2011
Cloth: 978-0-8101-2637-4
Upon its original publication in 1983, Wasted Morning catapulted Gabriela Adamesteanu to the first rank of Romanian novelists. She has since been translated into many languages, and now her most famous novel is available in English for the first time. At the center of Wasted Morning is Vica Delca, a simple, poor woman in her seventies who has endured the endless series of trials and tribulations that was Romanian history from WWI to the end of the twentieth century.

She's a born storyteller, chatting and gossiping tirelessly. But she also listens, so it is through her that Adamesteanu is able to show us a panoramic portrait of Romanian society as the fortunes of its various strata shift violently. Rich or poor, honest (more or less) or deceitful, all of the characters in this polyphonic novel are brought vividly to life. From Bucharest's aspirations to be the Paris of Eastern Europe to the darkest days of dictatorship, the novel presents a sweeping vision of the personal and collective costs of a turbulent century.
AUTHOR BIOGRAPHY
Gabriela Adamesteanu is one of Romania's most acclaimed authors. Among her best-known works of fiction are The Equal Way of Every Day (1975), Wasted Morning (1984), The Encounter (2007), and Provisional (2010). Her awards include the Romanian Academy Award for Fiction, The Romanian Writers Union Award, a Hellman Hammett Grant from Human Rights Watch. Her books have been translated and published in France, Spain, Italy, Russian, Israel, Hungary, Germany, Bulgaria, and Estonia.
TABLE OF CONTENTS