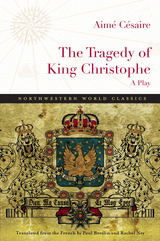 The Tragedy of King Christophe
by Aime Cesaire
Northwestern University Press, 2015
Paper: 978-0-8101-3058-6
The Tragedy of King Christophe (1963, revised 1970) is recognized as the Martiniquan writer and activist Aime Cesaire’s greatest play. Set in the period of upheaval in Haiti after the assassination of Jean-Jacques Dessalines in 1806, it follows the historical figure of Henri Christophe, a slave who rose to become a general in Toussaint Louverture’s army. Christophe declared himself king in 1811 and ruled the northern part of Haiti until 1820. Cesaire employs Shakespearean plotting and revels in the inexhaustible possibilities of language to convey the tragedy of Christophe’s transformation from a charismatic leader sensitive to the oppression of his people to an oppressor himself. Paul Breslin and Rachel Ney’s nimble, accurate translation includes an introduction and explanatory notes to guide students, scholars, and general readers alike.
AUTHOR BIOGRAPHY
AIMÉ CÉSAIRE (1913–2008) was a Martiniquan poet, author, and politician. He was one of the founders of the negritude movement in Francophone literature.

PAUL BRESLIN is a poet and a professor emeritus of English at Northwestern University. His most recent book of poetry, Between My Eye and the Light is featured in this catalog.

RACHEL NEY is a lecturer in French at Southern Methodist University, in Dallas, Texas.
REVIEWS

“A remarkable accomplishment. The Tragedy of King Christophe has finally received the translation it deserves. Breslin and Ney render the speech of peasants, parliamentarians, and priests in believable English. They have delved into the historical sources of the documents Césaire used in researching the story of Henri Christophe; their introduction situates the play in the history of the French Revolution and in the emergence of independent Haiti.” —A. James Arnold, A History of Literature in the Caribbean