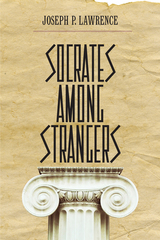 In Socrates among Strangers, Joseph P. Lawrence reclaims the enigmatic sage from those who have seen him either as a prophet of science, seeking the security of knowledge, or as a wily actor who shed light on the dangerous world of politics while maintaining a prudent distance from it. The Socrates Lawrence seeks is the imprudent one, the man who knew how to die.

The institutionalization of philosophy in the modern world has come at the cost of its most vital concern: the achievement of life wisdom. Those who have ceased to grow (those who think they know) close their ears to the wisdom of strangers—and Socrates, who stood face to face with death, is the archetypal stranger. His avowal of ignorance, Lawrence suggests, is more needed than ever in an age defined by technical mastery and expert knowledge.

JOSEPH P. LAWRENCE is a professor of philosophy at Holy Cross College in western Massachusetts.

TABLE OF CONTENTS
Contents
Preface
List of Abbreviations
Introduction: Beginning in Silence
1. Socrates in Japan
2. Socrates beyond the Academy
3. The Education of Socrates
4. Socrates and Alcibiades
5. Love and Philosophy
6. Standing in Death
7. The Resurrection of the Body
Epilogue
Acknowledgments
Notes
Index
REQUEST ACCESSIBLE FILE