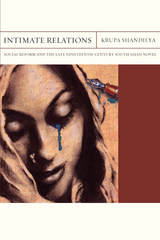 Intimate Relations remaps the discussion on gender and the nation in South Asia through a close study of the domestic novel as a literary genre and a tool for social reform. As a product of the intersection of literary and social reform movements, in the late nineteenth century the domestic novel became a site for literary innovation and also for rethinking women’s roles in society and politics. Krupa Shandilya focuses primarily on social reform movements that negotiated the intimate relations between men and women in Hindu and Muslim society, namely, the widow remarriage act in Bengal (1856) and the education of women promoted by the Aligarh movement (1858–1900). Both movements were invested in recovering woman as a “respectable” subject for the Hindu and Muslim nation, where respectability connoted asexual spirituality. While most South Asian literary scholarship has focused on a normative Hindu woman, Intimate Relations couples discussion of the representation of the widow in bhadralok (upper-caste, middle-class) society with that of the courtesan of sharif (upper-class, Muslim, feudal) society in Bengali and Urdu novels from the 1880s to the 1920s. By drawing together their disparate histories in the context of contemporaneous social reform movements, Shandilya reflects on the similarities of Hindu and Islamic constructions of the gendered nation.
AUTHOR BIOGRAPHY
KRUPA SHANDILYA is an assistant professor of Sexuality, Women’s and Gender Studies at Amherst College.