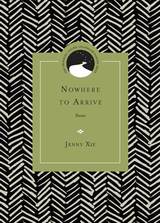 Nowhere to Arrive: Poems
by Jenny Xie
foreword by Chris Abani
Northwestern University Press, 2017
Paper: 978-0-8101-3508-6
Nowhere to Arrive takes as its subjects the whiplash of travel, the shuttling between disparate places and climes, and an unremitting sense of dislocation. These poems court the tension between the familiar and the foreign, between the self as distinct and the self as illusory. They look plainly at the startling strangeness of varied landscapes and mindscapes, and interrogate a state of unrootedness—one thrown into relief by the speaker's years abroad in Southeast Asia.

On a formal level, the poems in Nowhere to Arrive make room for the unsaid and that which cannot be articulated. Here, we have a vocabulary of silence alongside stark imagistic juxtapositions, poems that celebrate compression and the force of paratactic constructions. Attentiveness and concentration emerge as virtues, as the speaker surveys the vast territory of the present with a wakeful gaze.
AUTHOR BIOGRAPHY
JENNY XIE's work appears in Tin House, the New Republic, Harvard Review, the Literary Review, the Los Angeles Review of Books, and elsewhere. She was awarded Princeton University's Theodore H. Holmes '51 and Bernice Holmes National Poetry Prize in 2018. She teaches at New York University and lives in Brooklyn.
TABLE OF CONTENTS