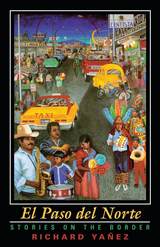 The Chicano characters in Richard Yañez's debut story collection live in El Paso's Lower Valley but inhabit a number of borders—between two countries, two languages, and two cultures, between childhood and manhood, life and death. The teenaged narrator of "Desert Vista" copes with a new school and a first love while negotiating the boundaries between his family's tenuous middle-class status and the working-class community in which they have come to live. Tony Amoroza, the protagonist of "Amoroza Tires," wrestles with the grief from his wife's death until an unexpected legacy fills him with new faith. María del Valle, "La Loquita," the central character of "Lucero's Mkt.," crosses the border into madness while her neighbors watch, gossip, and try to offer—or refuse—aid. Yañez writes with perfect understanding of his borderland setting, a landscape where poverty and violence impinge on traditional Mexican-American values, where the signs of gang culture strive with the ageless rituals of the Church. His characters are vivid, unique, fully authentic, searching for purpose or identity, for hope or meaning, in lives that seem to deny them almost everything. Yañez's world is that of the Southwestern Chicanos, but the fears and yearnings of his characters are universal.
AUTHOR BIOGRAPHY
Richard Yañez, associate professor of English at El Paso Community College, was born and raised on the U.S.-Mexico border.
TABLE OF CONTENTS
Front Cover
Title Page
Copyright page
Contents
Acknowledgments
Desert Vista
Good Time
Amoroza Tires
Rio Bravo
Rio Grande
Lucero's Mkt.
Sacred Heart
I&M Plumbing
REQUEST ACCESSIBLE FILE