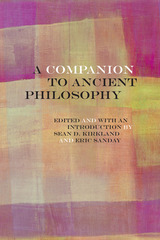 A Companion to Ancient Philosophy is a collection of essays on a broad range of themes and figures spanning the entire period extending from the Pre-Socratics to Plato, Aristotle, and the Hellenistic thinkers.

Rather than offering synoptic and summary treatments of preestablished positions and themes, these essays engage with the ancient texts directly, focusing attention on concepts that emerge as urgent in the readings themselves and then clarifying those concepts interpretively. Indeed, this is a companion volume that takes a very serious and considered approach to its designated task—accompanying readers as they move through the most crucial passages of the infinitely rich and compelling texts of the ancients. Each essay provides a tutorial in close reading and careful interpretation.

Because it offers foundational treatments of the most important works of ancient philosophy and because it, precisely by doing so, arrives at numerous original interpretive insights and suggests new directions for research in ancient philosophy, this volume should be of great value both to students just starting off reading the ancients and to established scholars still fascinated by philosophy's deepest abiding questions.
AUTHOR BIOGRAPHY
SEAN D. KIRKLAND is an associate professor of philosophy at DePaul University and the author of The Ontology of Socratic Questioning in Plato's Early Dialogues.

ERIC SANDAY is an associate professor of philosophy at the University of Kentucky and the author of A Study of Dialectic in Plato's "Parmenides."
TABLE OF CONTENTS

Early Greek Thinking: The Emergence of Philosophy
1. Phusis in Presocratic Thought: Seeking with Xenophanes - Robert Metcalf
2. Going With The Flow: Soul and Truth in Heraclitus - Drew Hyland
3. Justice, Change, and Knowledge: Parmenides and Melissus on Genesis and Natural Science - Rose Cherubin
4. “...As He Says in His Poetical Way”: Empedocles and Anaxagoras on the Motive Forces of Kosmos - Phil Hopkins
5. On Being a (W)hole: Aristophanes’ Contest with Socrates in Clouds - Damian Stocking

Classical Greek Philosophy: Plato and Aristotle
6. Erôs and Eris: Love and Strife in Ancient Greek Thought and Culture - John Russon
7. Plato and Aristotle: More than a Question of ‘Separate Forms’ - Francisco Gonzalez
8. Measure, Excess, and the All: To Agathon in Plato - Claudia Baracchi
9. In the Wake of Socrates: Impossible Memory - Walter Brogan
10. The Origins of Political Life in Plato’s Republic and Laws - George Harvey
11. Being in Late Plato - Eric Sanday
12. Aristotle on Physis: Analyzing the Inner Ambiguities and Transgression of Nature - Marjolein Oele
13. After Autopsy: An Introduction to Logos in Aristotle - Ömer Aygün
14. Developing Emotions: Aristotle’s Rhetoric and the Soul - Greg Recco
15. Hontina Tropon Gignetai Philos: Genesis vs. Alteration in the Forming of Friendships - John McCumber
16. The Political Context for Virtue: Aristotle’s Politics - Eve Rabinoff
17. Mimesis: Plato and Aristotle on the Political Power of Tragedy - Patricia Fagan

The Hellenistic Schools
18. Ataraxia: Tranquility at the End - Pascal Massie
19. A Well-Ordered World: The Developing Idea of Kosmos in Later Greek Philosophy - Gina Zavota
20. Searching for the Why: Plotinus on Being and the One beyond Being - Michael Wiitala