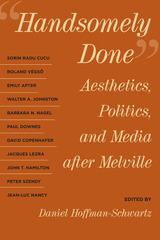 Handsomely Done: Aesthetics, Politics, and Media after Melville brings together leading and emerging scholars from comparative literature, critical theory, and media studies to examine Melville’s works in light of their ongoing afterlife and seemingly permanent contemporaneity. The volume explores the curious fact that the works of this most linguistically complex and seemingly most “untranslatable” of authors have yielded such compelling translations and adaptations as well as the related tendency of Melville’s writing to flash into relevance at every new historical-political conjuncture.

The volume thus engages not only Melville reception across media (Jorge Luis Borges, John Huston, Jean-Luc Godard, Led Zeppelin, Claire Denis) but also the Melvillean resonances and echoes of various political events and movements, such as the Attica uprising, the Red Army Faction, Occupy Wall Street, and Black Lives Matter. This consideration of Melville’s afterlife opens onto theorizations of intermediality, un/translatability, and material intensity even as it also continually faces the most concrete and pressing questions of history and politics.
AUTHOR BIOGRAPHY
DANIEL HOFFMAN-SCHWARTZ is a lecturer in comparative literature at Princeton University.
TABLE OF CONTENTS