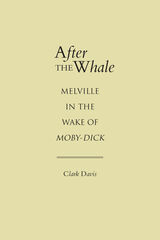 The study focuses on Melville’s vision of the purpose and function of language from Moby-Dick through Billy Budd with a special emphasis on how language—in function and form—follows and depends on the function and form of the body, how Melville’s attitude toward words echoes his attitude toward fish. Davis begins by locating and describing the fundamental dialectic formulated in Moby-Dick in the characters of Ahab and Ishmael. This dialectic produces two visions of bodily reality and two corresponding visions of language: Ahab’s, in which language is both weapon and substitute body, and Ishmael’s, in which language is an extension of the body—a medium of explanation, conversation, and play. These two forms of language provide a key to understanding the difficult relationships and formal changes in Melville’s writings after Moby-Dick.

By following each work’s attitude toward the dialectic, we can see the contours of the later career more clearly and so begin a movement away from weakly contextualized readings of individual novels and short stories to a more complete consideration of Melville’s career. Since the rediscovery of Herman Melville in the early decades of this century, criticism has been limited to the prose in general and to a few major works in particular.

Those who have given significant attention to the short fiction and poetry have done so frequently out of context, that is, in multi-author works devoted exclusively to these genres. The result has been a criticism with large gaps, most especially for works from Melville’s later career. The relative lack of interest in the poetry has left us with little understanding of how Melville’s later voices developed, of how the novels evolved into tales, the tales into poetry, and the poetry back into prose. In short, the development of Melville’s art during the final three decades of his life remains a subject of which we have been afforded only glimpses, rarely a continuous attention. After the Whale provides a new, more comprehensive understanding of Melville’s growth as a writer.
AUTHOR BIOGRAPHY

Clark Davis is professor in the Department of English and Literary Arts at the University of Denver. He is author of It Starts with Trouble: William Goyen and the Life of Writing.

Part I. Moby-Dick and After

Chapter 1. Moby-Dick and the Divided Body

Chapter 2. Language and the Ascetic Body in Pierre and “Bartleby”

Chapter 3. Israel Potter and the Search for the Hearth

Part II. The Limits of Form

Chapter 4. Toward Deception: The Short Fiction and the Failing Body

Chapter 6. The Fissure in the Hearth: Battle Pieces

Chapter 7. Clarel and the Search for the Divine Body

Chapter 8. A Question of Distance: The Late Poetry

Chapter 9. Billy Budd and the Touch of a God