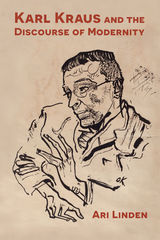 Ari Linden’s Karl Kraus and the Discourse of Modernity reconsiders the literary works of the Viennese satirist, journalist, and playwright Karl Kraus (1874–1936). Combining close readings with intellectual history, Linden shows how Kraus’s two major literary achievements (The Last Days of Mankind and The Third Walpurgis Night) and his adaptation of The Birds by Aristophanes (Cloudcuckooland) address the political catastrophes of the first third of Europe’s twentieth century—from World War I to the rise of fascism.

Kraus’s central insight, Linden argues, is that the medial representations of such events have produced less an informed audience than one increasingly unmoved by mass violence. In the second part of the book, Linden explores this insight as he sees it inflected in the writings of Søren Kierkegaard, Walter Benjamin, and Theodor Adorno. This hidden dialogue, Linden claims, offers us a richer understanding of the often-neglected relationship between satire and critical theory writ large.
AUTHOR BIOGRAPHY
ARI LINDEN is an assistant professor in the Department of German Studies at the University of Kansas.
TABLE OF CONTENTS