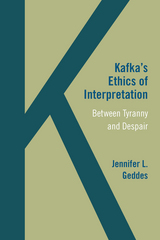 Kafka's Ethics of Interpretation refutes the oft-repeated claim, made by Kafka's greatest interpreters, including Walter Benjamin and Harold Bloom, that Kafka sought to evade interpretation of his writings. Jennifer L. Geddes shows that this claim about Kafka's deliberate uninterpretability is not only wrong, it also misconstrues a central concern of his work. Kafka was not trying to avoid or prevent interpretation; rather, his works are centrally concerned with it.

Geddes explores the interpretation that takes place within, and in response to, Kafka's writings, and pairs Kafka's works with readings of Sigmund Freud, Pierre Bourdieu, Tzvetan Todorov, Emmanuel Levinas, and others. She argues that Kafka explores interpretation as a mode of power and violence, but also as a mode of engagement with the world and others. Kafka, she argues, challenges us to rethink the ways we read texts, engage others, and navigate the world through our interpretations of them.
AUTHOR BIOGRAPHY
JENNIFER L. GEDDES is an assistant professor of religious studies at the University of Virginia. She is the author of Evil after Postmodernism and coeditor of The Double Binds of Ethics after the Holocaust.
TABLE OF CONTENTS