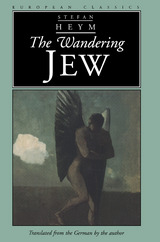 The Wandering Jew
by Stefan Heym
Northwestern University Press, 1999
Paper: 978-0-8101-1706-8
According to the myth of the Wandering Jew, Ahasverus denied Christ a resting place while Christ was traveling to Golgotha. In turn, Ahasverus was cursed to roam the earth until the Second Coming. Stefan Heym's novel re-creates and expands this myth to propose that the right synthesis of love and rebellion can bring humankind to the Kingdom of Heaven.

Heym introduces both Ahasverus and Lucifer as angels cast out of heaven for their opinions on God's order. Their respective oppositions continue throughout the rest of time: Ahasverus remains defiant through protest rooted in love and a faith in progress, while Lucifer is rebellious by means of his old, familiar methods. In a funny eternity of run-ins, debates, and meddling with characters such as Christ, a disciple of Luther, and a Marxist professor in East Germany, Ahasverus and Lucifer struggle on, awaiting the Second Coming.
AUTHOR BIOGRAPHY
Stefan Heym is representative of many intellectuals in the former East Germany who found themselves torn between loyalty to the ideals of their state and disdain for the reality. He was born into a secular Jewish family in Chemnitz. As a young man, he went to the United States to escape Hitler, where he worked for a while as a journalist. In 1943 he joined the American army. His first novel, The Crusaders (1948), became a best-seller. It was loosely based on his wartime experiences and filled with contempt not only for the Nazi government, but for virtually all of German culture. Distressed by the rise of McCarthyism in the United States and by Western tolerance of former Nazi officials, Heym emigrated to East Germany in 1953 and gave his enthusiastic support to the Socialist aspirations of his new homeland. His disillusionment with East Germany was far more gradual and, by his own account, more difficult than that experienced in the United States. In 1976 Heym protested the forced emigration of singer-songwriter Wolf Biermann from the German Democratic Republic. Two years later he was fined and expelled from the East German Writers' Union for accepting royalties for work published abroad. Though Heym continued to believe that the GDR was the "better-half" of Germany, disillusion with the reality of socialism moved him to turn to his Jewish heritage for inspiration in novels such as The King David Report (1972) and The Wandering Jew (1984). In 1992 he became a founding member of the "Committee for Justice," a lobby representing the interests of former East Germans in a newly united Germany.
REQUEST ACCESSIBLE FILE