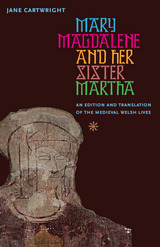 Mary Magdalene and Her Sister Martha: An Edition and Translation of the Medieval Welsh Lives provides scholarly editions and English translations of the medieval Welsh versions of the legends of Mary Magdalene and Martha. Described by Victor Saxer as medieval best sellers, these hagiographical tales, which described how Mary Magdalene and her sister Martha survived a perilous sea voyage from the holy land and evangelized Provence, were available in many different Latin and vernacular versions and circulated widely in the medieval West. The texts were translated or adapted into Middle Welsh some time before the mid-fourteenth century: the Middle Welsh Life of Mary Magdalene is extant in thirteen manuscripts and the Middle Welsh Life of Martha is preserved in eight of the same manuscripts. Jane Cartwright makes the Middle Welsh versions available to an international audience for the first time and provides a detailed study of the Welsh manuscripts that contain the texts, a comparison between the different manuscripts versions and a discussion of the wider hagiographical context of the texts in Wales. The volume includes transcriptions, editions and translations of the two Lives based on the oldest most complete extant versions found in the Red Book of Talgarth c. 1400, as well as an additional section of text describing Mary Magdalenes life before Christs crucifixion from the fifteenth-century Aberystwyth, National Library of Wales, Peniarth MS 27ii. The edition is accompanied by a comprehensive glossary which provides translations of all medieval Welsh words that occur in the texts, an analysis of the development and transmission of the legends, as well as a discussion of the relevance and popularity of these two female saints in late medieval Wales: medieval Welsh poetry, church dedications, and holy wells are also considered.
TABLE OF CONTENTS
Title Page
Copyright Page
Contents
Acknowledgments
1. Introduction
2. Transcription
2. Edition
4. Translation
Glossary
Bibliography
Index