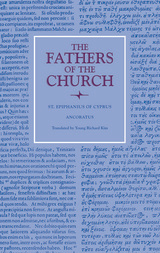 Epiphanius of Cyprus was lead bishop of the island from 367 until his death in 403, and he was a contemporary of several of the great church fathers of the patristic era, including Athanasius, Basil, and Jerome. He is well known among modern scholars for his monumental heresiology, the Panarion, as well as for his involvement in several ecclesiastical and theological controversies. Before he began to write his magnum opus, however, he had already completed the Ancoratus, an important theological treatise, written in the form of a letter to Christians in southern Anatolia. The Ancoratus addressed numerous theological issues, particularly in response to the continuous disputes about the divinity of the Son, the developing arguments over the divinity of the Holy Spirit, and the early quarrels over the Incarnation of Christ. In addition, he included his thoughts on proper biblical exegesis, the problematic theology of Origen, and the relationship of the Christian faith with Hellenistic culture. Epiphanius's convictions on these issues represented important contributions to the ongoing theological and cultural controversies of the late fourth century, but he has often been overshadowed in modern scholarship by the work of his more illustrious contemporaries. Because there has been no complete English translation of the Ancoratus to date, this volume adds significantly to the resources available for patristic studies.
TABLE OF CONTENTS
Contents
Acknowledgments
Abbreviations and Sigla
Select Bibliography
Introduction
Introduction
Ancoratus
Foreword
Letter from Presbyters of Syedra
Letter from Palladios
Ancoratus
Indices
General Index
Index of Scriptural Allusions and Citations