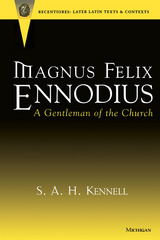 Magnus Felix Ennodius: A Gentleman of the Church
by Stefanie A.H. Kennell
University of Michigan Press, 2000
Cloth: 978-0-472-10917-3
Magnus Felix Ennodius (474-521), deacon of Milan and bishop of Pavia in the turbulent years after the fall of the Roman Empire in the West, was a prolific writer of letters, poetry, speeches, and pamphlets on the controversies that beset the church in his day. In the Middle Ages, he was read as a model of style and source of canon law. More recently, however, Ennodius' writings have been denigrated as the vapid product of a frivolous mind more concerned with form than content. Magnus Felix Ennodius: A Gentleman of the Church sets the record straight by restoring Ennodius to his social and literary context. Ennodius stands revealed as a man on the cusp of the ancient and medieval worlds, his thought still shaped according to classical norms, but his writings informed with a sensibility that prefigures that of the Christian Middle Ages. As the only book-length study of Ennodius, here the author explores all aspects of Ennodius' life and literary production to augment the collective understanding of him on two major fronts, rhetoric and meaning, so that he can take his place as an important author and historical figure. Deeply insightful, and refreshingly original, the author breaks new ground in studying this period of history, so often overshadowed by the classical and middle ages that immediately precede and succeed it.
S. A. H. Kennell is Adjunct Professor of Classics, Memorial University of Newfoundland.
REQUEST ACCESSIBLE FILE