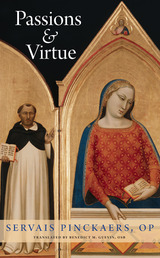 This book, the last that noted moral theologian Servais Pinckaers, OP, wrote before his death, was conceived as a follow-up to his previous work Plaidoyer pour la vertu (An Appeal for Virtue) (2007) Pinckaers' aim in Passions and Virtue was to show the positive and essential role that our emotions play in the life of virtue. His purpose is part of a larger project of renewing moral theology, a theology too often experienced as an ethics of obligation rather than as a practical guide to living virtuously. To this end, Pinckaers sketches a positive psychology of the passions as found in the biblical tradition, in the writings of the Fathers of the Church, in pagan authors and, especially, in the writings of Saint Thomas Aquinas.
TABLE OF CONTENTS
Contents
Foreword by Michael Sherwin, OP
Introduction
1. Virtue and the Passions
2. List of Passions
3. Love and Hate
4. Mercy and Pity
5. Concupiscence and Hope
6. Delectation, Pleasure, and Joy
7. Suffering, Pain, and Sadness
8. The Virtue of Humor
9. The Virtue of Silence
10. Anger and Virtue
11. Piety
12. Work and Virtue
13 Rest and Leisure
14. Virtue and Sports
15. Psychology and the Virtues
16. Of the Usefulness of the Useless Servant
Index