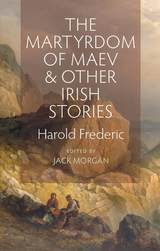 The Martyrdom of Maev and Other Irish Stories gathers for the first time all of the Irish work Harold Frederic completed in his lifetime. He planned more, but died of a stroke in his early forties, in England, where he was employed as The New York Times London Correspondent. He had earlier written his publisher that he had been "toiling for years" on the archeology of the Iveagha (present Mizen) Peninsula in Cork, and that the projected book of historical fiction underway would be unique. The Martyrdom of Maev and Other Irish Stories brings together the four sixteenth-century stories that Frederic finished and published in magazines in 1895-96, and two of his stories set in the west of Ireland of the second-half of the nineteenth century.
TABLE OF CONTENTS
Contents
Acknowledgments
Introduction by Jack Morgan
Part I
1. The Martyrdom of Maev
2. The Lady of Muirisc
Part II
3. In the Shadow of Gabriel
4. The Path of Murtogh
5. The Wooing of Teige
6. The Truce of the Bishop
Chronology
Bibliography