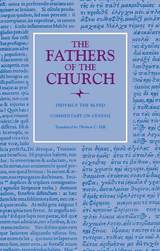 Blind since early childhood, the Egyptian theologian and monk Didymus (ca. 313-398) wielded a masterful knowledge of Scripture, philosophy, and previous biblical interpretation, earning the esteem of his contemporaries Athanasius, Antony of Egypt, Jerome, Rufinus, and Palladius, as well as of the historians Socrates and Theodoret in the decades following his death. He was, however, anathematized by the Fifth Ecumenical Council in 553 because of his utilization and defense of the works of Origen, and this condemnation may be responsible for the loss of many of Didymus's writings. Jerome and Palladius mentioned that Didymus had written commentaries on Old Testament books; these commentaries were assumed to be no longer extant until the discovery in 1941 in Tura, Egypt, of papyri containing commentaries on Genesis, Zechariah, Job, Ecclesiastes, and some of the Psalms.
TABLE OF CONTENTS
Table of Contents
Note to the Reader
Abbreviations and Sigla
Select Bibliography
Introduction
The Genesis Commentary among the Works of Didymus
Text of the Commentary on Genesis; Didymus’s Biblical Text
Didymus’s Approach to Scripture and Style of Commentary
Didymus as Interpreter of Genesis
Theological Accents of the Commentary on Genesis
Significance of Didymus’s Commentary on Genesis
Commentary on Genesis
Chapter One
Chapter Two
Chapter Three
Chapter Four
Chapter Five
Chapter Six
Chapter Seven
Chapter Eight
Chapter Twelve
Chapter Fifteen
Chapter Sixteen
Chapter Seventeen
Indices
Index of Proper Names
Index of Holy Scripture