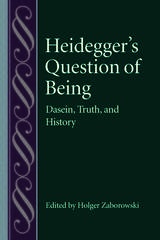 The number of open and controversial questions in contemporary Heidegger research continues to be a source of scholarly dialogue. There are important questions that concern the development, as it were, of his thought and the diff­erences and similarities between his early main work Being and Time and his later so-called being-historical thought, the thinking of the event, or appropriation, of Being. There are questions that focus on his relation to important figures in the history of ideas such as the pre-Socratics, Plato, Aristotle, Thomas Aquinas, Descartes, Leibniz, Kant, the German idealists, and Nietzsche. Other questions focus on his biography, on his rectorate and on his relation to politics in general and to National Socialism in particular or on his influence on subsequent philosophers.

The contributions to this volume, written by leading scholars in the field of Heidegger research, address many of these questions in close readings of Heidegger’s texts and thus provide sound orientation in the field of contemporary Heidegger research. They show how the di­fferent trajectories of Heidegger’s thought—his early interest in the meaning of Being and in Dasein, his discussion of, and involvement with, politics, his understanding of art, poetry, and technology, his concept of truth and the idea of a history of Being—all converge at one point: the question of Being. It thus becomes clear that, all di­fferences notwithstanding, Heidegger followed one very consistent path of thinking.
TABLE OF CONTENTS
Contents
Abbreviations
Introduction
1. Rethinking Difference
2. Reaffirming Heidegger’s “The Truth of Being”
3. Heidegger on Aristotle
4. Tracing technē
5. Heidegger’s Non-Idealistic Reading of Kant
6. Drawing the Line
7. Political Philosophy and the Ontological Question
8. Technology, Truth, and Thinking
9. How Heidegger Resolved the Tension between Technological Globalization and Indigenous Localization
10. Heidegger’s Poetic Measure
Selected Bibliography
Contributors
Index of Names
Index of Subjects