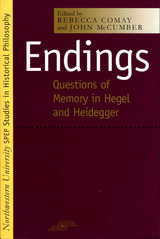 In this collection of essays, leading scholars provide a variety of models from which to view the unique relationship between the bodies of thought of Heidegger and Hegel, revealing how these philosophers offer ways of thinking historically that understand such thinking not merely as extensions and elaborations of a given paradigm but as actively engaged in the critical and transformative revisioning of the world.

Beginning at the point where Heidegger encountered Hegel, this volume of provocative essays addresses the respective philosophies of the two men. Leading scholars provide a variety of models from which to view the unique relationship between the bodies of thought of Heidegger and Hegel: bodies of thought that cannot be taken as two objects to be compared, contrasted, and finally evaluated but that must be viewed in dynamic terms, as a relationship in which self-transformations lead to mutual transformations and vice versa.
AUTHOR BIOGRAPHY
REBECCA COMAY is a professor of philosophy at the University of Toronto.

JOHN McCUMBER is a professor of German at Northwestern University.
TABLE OF CONTENTS

2. The History of Being and Its Hegelian Model
Michel Haar

3. Circultion and Constitution at the End of History
David Kolb

6. The Hegelian Legacy in Heidegger's Overcoming of Aesthetics
Jacques Taminiaux

8. Heidegger on Hegel's Antigone: The Memory of Gender and the Forgetfulness of the Ethical Difference
Kathleen Wright