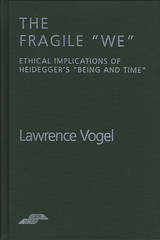 Critics have charged that Heidegger's account of authenticity is morally nihilistic, that his fundamental ontology is either egocentric or chauvinistic; and many see Heidegger's turn to Nazism in 1933 as following logically from an indifference, and even hostility, to "otherness" in the premises of his early philosophy.

In The Fragile "We": Ethical Implications of Heidegger's "Being and Time," Lawrence Vogel presents three interpretations of authentic existence—the existentialist, the historicist, and the cosmopolitan—each of which is a plausible version of the personal ideal depicted in Being and Time. He then draws parallels between these interpretations and three moments in the contemporary liberal-communitarian debate over the relationship of the "I" and the "We." His book contributes both to a diagnosis of what there is about Being and Time that invites moral nihilism and to a sense of how fundamental ontology might be recast so that "the other" is accorded an appropriate place in an account of human existence.
AUTHOR BIOGRAPHY
LAWRENCE VOGEL is assistant professor of philosophy at Connecticut College.
REVIEWS
"Given the current high level of interest in Heidegger's thought, and given the obscurity not only of Heidegger's texts but of most of his commentators as well, the lucidity of Vogel's discussion should attract a wide readership. Vogel manages to combine sympathy and sharp criticism in such a way as to achieve something close to an optimum degree of critical distance from his subject matter. This is extremely rare in the Heidegger literature." —David Detmer, Purdue University