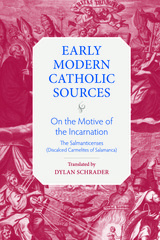 The Catholic University of America Press is pleased to announce a new series, Early Modern Catholic Sources, edited by Ulrich L. Lehner and Trent Pomplun. This series – the only one of its kind – will provide translations of early modern Catholic texts of theological interest written between 1450 and 1800.

The first volume in this series is On the Motive of the Incarnation, the first English translation of the seventeenth-century Discalced Carmelites at the University of Salmanca treatise on the motive of the Incarnation. Originally intended for students of their order, it became a major contribution to broader theological discourse. In this treatise, they defend the assertion that God intended Christ’s Incarnation essentially as a remedy for sin, such that if Adam had not sinned Christ would not have become incarnate, and that, at the same time, God intended all other works of nature and grace for the sake of Christ at their end. The Salmanticenses’ position thus combines elements of the Franciscan and Dominican traditions, stemming from the thought of Blessed John Duns Scotus and Saint Thomas Aquinas. This treatise is an exhaustive effort to show how the Scotistic emphasis on the primacy of Christ as the first willed and intended by God can be articulated within a Thomistic framework that acknowledges the contingency of the Incarnation on the need for redemption. In addition to the translation, the volume will include a brief introduction and extensive notes for theologians, historians, and students.
TABLE OF CONTENTS
Contents
Acknowledgments
Abbreviations
Introduction
On the Motive of the Incarnation
Doubt I. Whether God would assume flesh by virtue of the present decree if Adam had not sinned?
§ 1. The certain is separated from the uncertain, and the state of thequestion is opened up
§ 2. The opinion of St. Thomas is preferred and bolstered by a singular foundation
§ 3. The replies of the Scotists are impugned
§ 4. The escapes sought by Suárez and others are cut off
§ 5. The challenge of a serious objection is met and the link between the Incarnation and the remediation of sin is explained
§ 6. Replies against the preceding doctrine and extrication from them
§ 7. The contrary opinion is related and some of its lines of reasoning overturned
§ 8. The challenge of two other arguments for the same opinion is met
Doubt II. Whether, if Adam had not sinned, Christ would come by virtue of another decree that God would have?
§ 1. The true opinion is clarified by some assertions
§ 2. The foundations of the adverse opinions are demolished
§ 1. The certain is separated from the uncertain
§ 2. The affirmative opinion is preferred
§ 3. The rationales for the contrary opinion are addressed
Doubt IV. Whether, by virtue of the present decree, Christ would come if actual sins existed, even if original sin did not exist?
§ 1. The negative opinion is preferred and contrary lines of reasoning are torn apart
Bibliography
Index