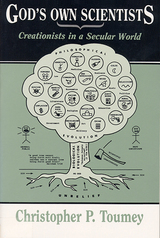 Toumey focuses the tools of his discipline on a group whose distance from the twentieth-century American mainstream is measured not in decades or miles but rather in existential understandings about reality. Toumey studies both the national scientific creationism movement and the operation of a local creationist study group in his state's Research Triangle in the mid-1980s, seeking to understand the underlying beliefs--about morality, the Bible, science itself--that modern scientific creationism embodies, as well as the reasons this "system of cultural meanings" helps many conservative Christians "make sense of the realities, anxieties, changes, and uncertainties of life in the United States in the late twentieth century." A perceptive and respectful analysis by a nonbeliever