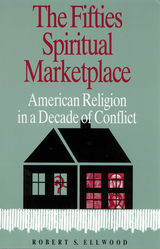 If you still hold the notion that the fifties were the "good old days," blessed with incomparable social affluence and widespread family unity, all buttressed by a strong, unconflicted spirituality, then look again. In this compelling narrative of religion in a decade still embraced by an indefatigable nostalgia, Robert Ellwood interrogates the notion of the fifties as an era of normalcy, and proves it to be full of spiritual strife.

A companion to his Sixties Spiritual Awakening, Ellwood explores the major Catholic-Protestant tensions of the decade, the conflict between theology and popular faith, and the underground forms of fifties religiosity like "Beat" Zen, UFO contactees, Thomas Merton monasticism, and the Joseph Campbell / Carl Jung revival of mythology. Ellwood frames his detailed and lively account with the provocative idea of the fifties as a "supply-side" free enterprise spiritual marketplace, with heady competition between religious groups and leaders, and with church attendance at a record high.

In addition to challenging an idealistic fifties cultural milieu, the book analyzes American religious responses to key historical events like the Korean War, McCarthyism, and the civil rights movement, turning a religious lens on the cultural history of the United States.
AUTHOR BIOGRAPHY
Robert Ellwood is professor in the School of Religion at the University of Southern California. He has published over a dozen books including Islands of the Dawn and The Sixties Spiritual Awakening (Rutgers University Press).