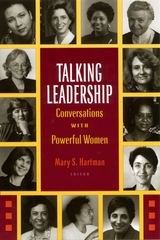 Talking Leadership presents an impressive and thought-provoking look at variation and commonality in the lives and leadership approaches of some of today's outstanding women, whose fields range from philanthropy to politics, and from business to academia. Regardless of their different backgrounds and areas of expertise, these women are united in a commitment to positive change - change that includes improving women's lives and options.

This book encourages readers to expand their definition of who a "leader" is and can be. In addition to occupants of formal positions on the upper rungs of major institutions, it urges the inclusion of those whose ability to influence and move people is expressed through teaching, writing, or taking action in arenas-whether local or global-that include neighborhood communities and even family households. The women in Talking Leadership were selected not only for their impressive achievements but for their willingness to offer candid and thoughtful assessments of their experiences in leadership - the costs as well as the rewards, the strategies that worked and those that failed.

Well beyond the undeniable pleasures of personal details and entertaining anecdotes, these conversations capture for readers a variety of images, experiences, approaches, strategies, and insights about what it is like to be a woman and a major leader at the close of the 20th century. Many of these women are "firsts" in their fields, and each is aware that she occupies space in her work life in which her womanhood sets her apart - more often in more uncomfortable ways than comfortable ones. On the eve of a new millenium, the book presents an image of how far women have come in leadership, and how far they have to go.

The leaders featured in this book

Peggy Antrobus - prize-winning economist and founding director of the Women and Development Unit at the University of the West Indies.

Mildred Dresselhaus - first tenured woman faculty member in the engineering school at the Massachusetts Institute of Technology; president of the American Association for the Advancement of Science; 1990 National Medal of Science winner.

Antonia Hernandez - President and General Counsel of the Mexican American Legal Defense and Education Fund, the most influential civil rights and advocacy organization for Latinos and Latinas in the U. S.

bell hooks - distinguished professor of English, City University, New York; author of numerous books, including Sisters of the Yam: Black Women and Self Recovery and Ain't I a Woman: Black Women and Feminism.

Karen Nussbaum - Director, Working Women's Department, the first women's unit within the AFL-CIO; former director of the U.S. Women's Bureau; founder of "9 to 5."