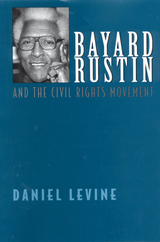 Best known as the man who organized the Great March on Washington in 1963, Bayard Rustin was a vital force in the civil rights movement from the 1940s through the 1980s.  Rustins's activism embraced the wide range of crucial issues of his time: communism, international pacifism, and race relations.

Rustin's long activist career began with his association with A. Phillip Randolph of the Brotherhood of Sleeping Car Porters.  Then, as a member of A. J. Muste's Fellowship of Reconciliation, he participated in the "Journey of Reconciliation" (an early version of the "Freedom Rides" of 1961).  He was a close associate of Martin Luther King in Montgomery and Atlanta and rose to prominence as organizer of the 1963 March on Washington.  Rustin played a key role in applying nonviolent direct action to American race relations while rejecting the separatism of movements like Black Power in the 1960s, even at the risk of his being marginalized by the younger generation of civil rights activists.  In his later years he tried to hold the civil rights coalition together and to fight for the economic changes he thought were necessary to decrease racism.

Daniel Levine has written the first scholarly biography that examines Rustin's public as well as private persona in light of his struggles as a gay black man and as an activist who followed his own principles and convictions.  The result is a rich portrait of a complex, indomitable advocate for justice in American society.
AUTHOR BIOGRAPHY
Daniel Levine is a professor of history at Bowdoin College and is the author of three previous books on American history, including Poverty and Society.