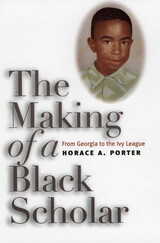 This captivating and illuminating book is a memoir of a young black man moving from rural Georgia to life as a student and teacher in the Ivy League as well as a history of the changes in American education that developed in response to the civil rights movement, the war in Vietnam, and affirmative action. Born in 1950, Horace Porter starts out in rural Georgia in a house that has neither electricity nor running water. In 1968, he leaves his home in Columbus, Georgia—thanks to an academic scholarship to Amherst College—and lands in an upper-class, mainly white world. Focusing on such experiences in his American education, Porter's story is both unique and representative of his time.

The Making of a Black Scholar is structured around schools. Porter attends Georgia's segregated black schools until he enters the privileged world of Amherst College. He graduates (spending one semester at Morehouse College) and moves on to graduate study at Yale. He starts his teaching career at Detroit's Wayne State University and spends the 1980s at Dartmouth College and the 1990s at Stanford University.
Porter writes about working to establish the first black studies program at Amherst, the challenges of graduate study at Yale, the infamous Dartmouth Review, and his meetings with such writers and scholars as Ralph Ellison, Tillie Olsen, James Baldwin, and Henry Louis Gates, Jr. He ends by reflecting on an unforeseen move to the University of Iowa, which he ties into a return to the values of his childhood on a Georgia farm. In his success and the fulfillment of his academic aspirations, Porter represents an era, a generation, of possibility and achievement.
AUTHOR BIOGRAPHY
Horace Porter is chair of African American World Studies and professor of English at the University of Iowa. He is the author of Jazz Country: Ralph Ellison in America (Iowa 2001) and Stealing the Fire: The Art and Protest of James Baldwin
TABLE OF CONTENTS