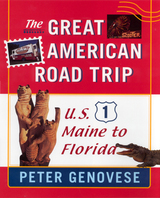 Take an unforgettable road trip down one of America’s most fascinating highways, U.S.

On what highway can you find the headquarters of the FBI, Dow Jones Interactive, and the National Enquirer? What road is home to the Bronx Zoo, the Okefenokee Swamp, and Flipper? On the side of what freeway can you find the Super Duper Weenie Wagon, Larry’s Redneck Bar, and the Big Chicken Barn? Peter Genovese found them all, along with about a million other fascinating and bizarre attractions, on U.S. 1, ‘the best damn highway in America,” as he calls it. Join him for the road trip of a lifetime The Great American Road Trip: A Journey Down U.S. 1.

U.S. 1 may not be America’s scenic highway, but it’s certainly the most colorful. It runs through Boston, New York, Baltimore, Washington, D.C., and Miami, in addition to Caribou, Maine, Quonochontaug, Rhode Island, and Alma, Georgia. It zig-zags along the wild and beautiful Maine coast and soars over the Atlantic Ocean as the Overseas Highway, one of the most spectacular stretches of road anywhere. The Star-Spangled Banner is on U.S. 1. Madonna lived on U.S. 1 (until she sold her house to Rosie O'Donnell). U.S. 1 is Main Street and the Miracle Mile, two-lane blacktop and six-lane expressway, straight as an arrow in some places and twistier than a Philadelphia soft pretzel in others.

Genovese spent two years on U.S. 1, talking to everyone from doughnut makers, dolphin trainers, and swamp guides to real Miami vice cops and the keeper of the national parasite collection. His resulting book is the most complete portrait of an American highway ever written. With his unerring eye for detail, sense of humor, and understanding of human nature, Genovese takes readers on a sometimes funny, sometimes sad, always illuminating 2,450-mile journey from Fort Kent, Maine to Key West, Florida.

Ride along with Genovese and grab a drink at the Last Resort Bar or the Last Chance Saloon, then pick up a paperback at the Banned Bookstore. Visit Oscar, the biggest gator in the Okefenokee Swamp, have dinner at Hog Heaven, and take in a Portland Seadogs baseball game. Tour a Budweiser brewery and go into the pit at a NASCAR race. Looking for someplace to stay? How about the world’s only underwater hotel, the Jules’ Undersea Lodge, or in a cabin made entirely from one pine tree at the Maine Idyll Motor Court? If it’s culture you seek, the highway boasts dozens of museums. While you may have heard of the Museum of Natural History and the National Museum of American Art, how about the Blacks in Wax Museum, Tragedy in the United States Museum, and the Mushroom Museum? There’s something for everyone on U.S. 1, and Genovese has written about it all in The Great American Road Trip.

AUTHOR BIOGRAPHY
Peter Genovese, a feature writer for The Star-Ledger, eats, lives-even dreams-New Jersey. The author of The Jersey Shore Uncovered and Roadside New Jersey (all published by Rutgers University Press). He has driven more than one million miles around the state in the past twenty years.