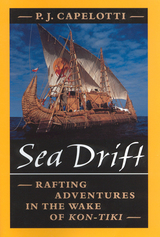 It was the original Survivor series, only without the omnipresent cameras, paramedics, and faux tribal rituals. Between the spring of 1947 and the summer of the year 2000, more than forty expeditions sought to drift across the oceans of the world on rafts made from straw, from bamboo, and from the same kinds of wood that children use to make model airplanes. These audacious raft voyages began with the legendary Kon-Tiki expedition, under the leadership of the renowned Norwegian explorer Thor Heyerdahl. The Kon-Tiki balsa wood raft drifted more than four thousand miles from Peru to Polynesia, and remained afloat months after experts predicted it would sink to the bottom of the Pacific. Heyerdahl’s radical thesis of a prehistoric world where ancient mariners drifted between continents on ocean currents electrified the postwar world. His Kon-Tiki: Across the Pacific by Raft sold twenty million copies in sixty-five languages.

Sea Drift is the first and only book to document all of the transoceanic raft expeditions that were organized and carried out in the half century after Kon-Tiki. But it is much more than a simple history of exploration. Readers learn of the Mormon who drifted to Hawaii to prove that wise men from Israel had colonized America, and the Frenchman who squeezed fresh water from the entrails of fish as he drifted alone across the Atlantic in a rubber boat. Then there was the anthropologist who put five men and six women on a raft to see who would make love to whom first.

Spanning more than fifty years and recounting more than forty expeditions, Sea Drift is a riveting chronicle of human daring, endurance, and folly.

AUTHOR BIOGRAPHY
P. J. Capelotti wrote the introduction to the fiftieth anniversary edition of Kon-Tiki as well as By Airship to the North Pole (Rutgers University Press). He teaches archaeology and American studies at Penn State University, Abington College.
TABLE OF CONTENTS