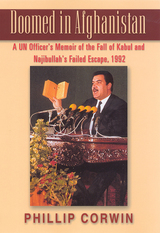 To understand more deeply the tragic events of September 11, 2001, it is critical to know Afghanistan’s recent and turbulent past. Doomed inAfghanistan provides a first-hand account of how failed diplomacy led to an Islamic fundamentalist victory in a war-torn country, and subsequently, to a Taliban takeover and a home for Osama bin Laden’s Al Qaeda terrorist network.

In April of 1992, Phillip Corwin was part of a United Nations team in Afghanistan whose mission was to help ensure the transfer of power from the Soviet-installed communist regime of President Najibullah to an interim government (that would prepare for elections). Without the support of the Soviet Union, Najibullah’s regime crumbled, and he was convinced to resign in favor of a national unity government, with the understanding that he would be evacuated to a neutral country (India). Due to a series of miscalculations and machinations, the U.N.’s diplomatic mission failed. Kabul fell to groups of mujahiddin before Najibullah could be evacuated. The inability of the various mujahiddin factions to unite led to their eventual defeat by the Taliban, who four years later routed Najibullah from his safe haven at the U.N. compound, and executed him.

Corwin gives a vivid account of the seminal event of Najibullah’s failed evacuation and the frenzied negotiations that were unable to forestall the anarchy and chaos that followed.