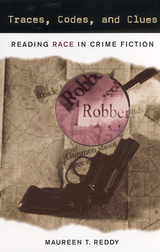 Detective fiction featuring white women and people of colorsuch as Barbara Neelys Blanche White and Walter Mosleys Easy Rawlinshas become tremendously popular. Although they are considered "light reading," mysteries also hold important cultural and social "clues." Much recent scholarly work has demonstrated that race is both a cultural fictionnot a biological realityand a central organizing principle of experience. Popular writers are likely to reflect the conventions of their own historical situations.

In Traces, Codes, and Clues: Reading Race in Crime Fiction, Maureen T. Reddy explores the ways in which crime fiction manipulates cultural constructions such as race and gender to inscribe dominant cultural discourses. She notes that even those writers who appear to set out to revise outdated conventions repeatedly reproduce the genres most conservative elements. The greatest obstacle to transforming crime fiction, Reddy states, is the fact that the genre itself is deeply embedded in the discourse of white (and male) superiority. There is, therefore, an absolute necessity to break away from that discoursethrough reversal or other strategiesin order to produce work that defies, and thus helps readers to defy, the dominant ideology of race.

AUTHOR BIOGRAPHY
Maureen T. Reddy is a professor of English and womens studies at Rhode Island College. Her other books include Crossing the Color Line: Race, Parenting, and Culture, and the edited collections Everyday Acts Against Racism and Race in the College Classroom: Pedagogy and Politics.