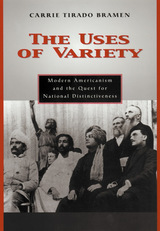 The turn of the last century, amid the excesses of the Gilded Age, variety became a key notion for Americans'a sign of national progress and development, reassurance that the modern nation would not fall into monotonous dullness or disorderly chaos. Carrie Tirado Bramen pursues this idea through the works of a wide range of regional and cosmopolitan writers, journalists, theologians, and politicians who rewrote the narrative of American exceptionalism through a celebration of variety. Exploring cultural and institutional spheres ranging from intra-urban walking tours in popular magazines to the 1893 World's Parliament of Religions in Chicago, she shows how the rhetoric of variety became naturalized and nationalized as quintessentially American and inherently democratic. By focusing on the uses of the term in the work of William James, Anna Julia Cooper, W. E. B. Du Bois, Hamlin Garland, and Wong Chin Foo, among many others, Bramen reveals how the perceived innocence and goodness of variety were used to construct contradictory and mutually exclusive visions of modern Americanism. Bramen's innovation is to look at the debates of a century ago that established diversity as the distinctive feature of U.S. culture. In the late-nineteenth-century conception, which emphasized the openness of variety while at the same time acknowledging its limits, she finds a useful corrective to the contemporary tendency to celebrate the United States as a postmodern melange or a carnivalesque utopia of hybridity and difference.

I. The Ideological Formation of Pluralism
1. William James and the Modern Federal Republic
2. Identity Culture and Cosmopolitanism

II. The Aesthetics of Diversity
3. The Uneven Development of American Regionalism
4. The Urban Picturesque and Americanization

Reviews of this book:
[Bramen] brings dogged research and steady focus to [a] central ambiguity in the American ethos...Her study delivers several powerful messages even plain-talking people can understand. For one, Bramen shows that issues of ethnic diversity and variety, far from being epiphenomena of the last few decades, course through our history and spotlight the ambiguities in what it means to be an American...The Uses of Variety boasts gems...of past cultural history that remind us these are perennial issues...[Bramen's] penetrating expedition through the nuances of America's breast-beating about 'diversity within unity' concentrates the mind. Out of many examples comes an important book: a flinty challenge to intellectual complacency about ourselves.
--Carlin Romano, Philadelphia Inquirer

The Uses of Variety is a significant addition to and revision of a century of American pragmatist thinking about difference. Bramen brings new conceptual tools to bear on the history of multicultural thought and literature and thereby avoids the common pitfalls to produce an important survey and synthesis.
--Tom Lutz, author of American Nervousness, 1903: An Anecdotal History and editor of These 'Colored' United States: African American Essays from the 1920s

Carrie Bramen offers a compelling, intellectually rigorous history of the protean idea of pluralism, a concept that has been embraced heartily by both liberals and conservatives as essential in defining American identity. Situating pluralism in philosophical, psychological, aesthetic, and political contexts, Bramen brings a fresh perspective to illuminating the meaning of the term for late Victorian America and, significantly, its legacy for us today.
--Linda Simon, author of Genuine Reality: A Life of William James

Taking William James's 'pluralistic universe' as a starting point, The Uses of Variety takes us through regions, ghettos, religious congresses, and a range of theoretical, philosophical, and literary works to explore the multiple and often conflicting constructions of 'variety' in the context of turn-of-the-century U.S. nationalism and cosmopolitanism. Carrie Tirado Bramen brings together a broad spectrum of historical events and cultural theories in which variety variously expressed, contained, and shaped an increasing diversity that was perceived as threatening national coherence. This insightful, thoroughly researched, and timely work will be indispensable for scholars interested in U.S. nationalism, modernism, cosmopolitanism, and multiculturalism.
--Priscilla Wald, author of Constituting Americans: Cultural Anxiety and Narrative Form