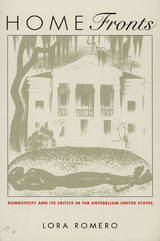 Unlike studies of nineteenth-century culture that perpetuate a dichotomy of a public, male world set against a private, female world, Lora Romero’s Home Fronts shows the many, nuanced, and sometimes contradictory cultural planes on which struggles for authority unfolded in antebellum America.
Romero remaps the literary landscape of the last century by looking at the operations of domesticity on the frontier as well as within the middle-class home and by reconsidering such crucial (if sometimes unexpected) sites for the workings of domesticity as social reform movements, African-American activism, and homosocial high culture. In the process, she indicts theories of the nineteenth century based on binarisms and rigidity while challenging models of power and resistance based on the idea that "culture" has the capacity to either free or enslave. Through readings of James Fenimore Cooper, Catherine Beecher, Harriet Beecher Stowe, Maria Stewart, and Nathaniel Hawthorne, Romero shows how the politics of culture reside in local formulations rather than in essential and ineluctable political structures.
AUTHOR BIOGRAPHY

At the time of her death, Lora Romero was Assistant Professor of English at Stanford University.

REVIEWS
"A landmark book in the effort to reconsider the structures of domesticity in nineteenth-century America. Home Fronts is dazzling."—Cathy N. Davidson, Duke University


&quot;Romero&rsquo;s striking command of all the recently resurrected nineteenth-century texts will make this book essential to people who work in this field.&quot;&mdash;Paul Lauter, Trinity College