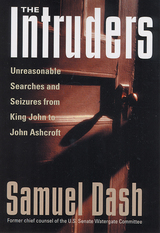 What led to the Fourth Amendment’s protection of the people against unreasonable searches and seizures, codified in written law for the first time in history, and are we in danger of losing that protection?  Celebrated lawyer Samuel Dash, known for his role as Chief Counsel of the Watergate Committee, explores the struggle for privacy. He does so by telling the dramatic tales of the people who were involved in influential legal battles, including landmark Supreme Court cases.

Covering almost eight-hundred years of history, Dash begins with the time of King John of England and the Magna Carta, then moves to colonial America as colonists resisted searches mandated under King George. These tensions contributed to the birth of the United States and the adoption of our Bill of Rights with its Fourth Amendment, protecting people against unreasonable searches and seizures.

How effective that protection has been is the story of the next two centuries. Dash explores U.S. Supreme Court cases through the sometimes humorous experiences of the people involved, including the unlucky gambler with a shoplifting wife and the police lieutenant turned king of bootleggers. To some extent, judicial safeguarding of Fourth Amendment protections depended on who made up the majority of the Court at any given time.

By 2001 a conservative majority of the Court had given law enforcement agents greater search powers than ever before. Dash challenges the legal justification of the Bush Administration’s grab for greater search, seizure, and wiretap powers after the 9/11 terrorists’ attacks. He reminds us of government abuses of power in prior emergencies in American history. For Dash, the best security is our belief in individual liberty and the enforcement of our Bill of Rights.