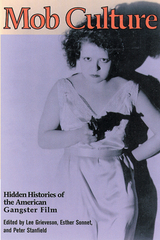 Sinister, swaggering, yet often sympathetic, the figure of the gangster has stolen and murdered its way into the hearts of American cinema audiences. Despite the enduring popularity of the gangster film, however, traditional criticism has focused almost entirely on a few canonical movies such as Little Caesar, Public Enemy, and The Godfather trilogy, resulting in a limited and distorted understanding of this diverse and changing genre.

Mob Culture offers a long-awaited, fresh look at the American gangster film, exposing its hidden histories from the Black Hand gangs of the early twentieth century to The Sopranos. Departing from traditional approaches that have typically focused on the "nature" of the gangster, the editors have collected essays that engage the larger question of how the meaning of criminality has changed over time. Grouped into three thematic sections, the essays examine gangster films through the lens of social, gender, and racial/ethnic issues.

Destined to become a classroom favorite, Mob Culture is an indispensable reference for future work in the genre.

AUTHOR BIOGRAPHY
Lee Grieveson is the director of the graduate program in film studies at University College London and the author of Policing Cinema: Movies and Censorship in Early-Twentieth-Century America.

Esther Sonnet is a principal lecturer at the University of Portsmouth and has published numerous articles on contemporary film, gender, and sexuality.

Peter Stanfield is a senior lecturer in film studies at the University of Kent at Canterbury and the author of Hollywood, Westerns and the 1930s: The Lost Trail.