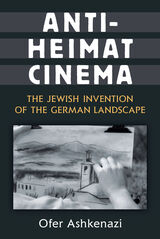 Anti-Heimat Cinema: The Jewish Invention of the German Landscape studies an overlooked yet fundamental element of German popular culture in the twentieth century. In tracing Jewish filmmakers’ contemplations of “Heimat”—a provincial German landscape associated with belonging and authenticity—it analyzes their distinctive contribution to the German identity discourse between 1918 and 1968. In its emphasis on rootedness and homogeneity Heimat seemed to challenge the validity and significance of Jewish emancipation. Several acculturation-seeking Jewish artists and intellectuals, however, endeavored to conceive a notion of Heimat that would rather substantiate their belonging.

This book considers Jewish filmmakers’ contribution to this endeavor. It shows how they devised the landscapes of the German “Homeland” as Jews, namely, as acculturated “outsiders within.” Through appropriation of generic Heimat imagery, the films discussed in the book integrate criticism of national chauvinism into German mainstream culture from World War I to the Cold War. Consequently, these Jewish filmmakers anticipated the anti-Heimat film of the ensuing decades, and functioned as an uncredited inspiration for the critical New German Cinema.
AUTHOR BIOGRAPHY
Ofer Ashkenazi is Associate Professor of History at the Hebrew University of Jerusalem.
REVIEWS
“Anti-Heimat Cinema presents a solid, interesting, and convincing contribution to one of the most central and fundamental scholarly discussions in German Studies: the place of German Jewish culture within German culture. It makes an important contribution to German film history and the history of the Anti-Heimat genre.”
—Todd Herzog, University of Cincinnati
— Todd Herzog

TABLE OF CONTENTS
Acknowledgments
Contents
Introduction
1. Sally’s Nightmare: German-Jewish Landscapes and the Emergence of Anti-Heimat Cinema
2. The Menace and Promise of Heimat in the Early Weimar Era: E. A. Dupont’s Cinematic Landscapes
3. The Weimar Legacy: Helmar Lerski and the Outing of the Anti-Heimat Film
4. The Beloved Soil of the Vaterland: Returning Exiles and the West German Landscape
5. No Way Back: Jewish Rémigrés and the City as Heimat
6. History as Heimat: The Puzzling German Landscapes of Konrad Wolf
Epilogue: The Aftermath of the German-Jewish Anti-Heimat Film
Notes
Works Cited
Index
REQUEST ACCESSIBLE FILE