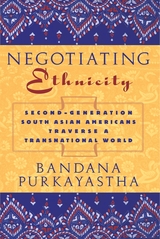 In the continuing debates on the topic of racial and ethnic identity in the United States, there are some that argue that ethnicity is an ascribed reality. To the contrary, others claim that individuals are becoming increasingly active in choosing and constructing their ethnic identities.Focusing on second-generation South Asian Americans, Bandana Purkayastha offers fresh insights into the subjective experience of race, ethnicity, and social class in an increasingly diverse America. The young people of Indian, Pakistani, Bangladeshi, and Nepalese origin that are the subjects of the study grew up in mostly white middle class suburbs, and their linguistic skills, education, and occupation profiles are indistinguishable from their white peers. By many standards, their lifestyles mark them as members of mainstream American culture. But, as Purkayastha shows, their ethnic experiences are shaped by their racial status as neither “white” nor “wholly Asian,” their continuing ties with family members across the world, and a global consumer industry, which targets them as ethnic consumers.”

Drawing on information gathered from forty-eight in-depth interviews and years of research, this book illustrates how ethnic identity is negotiated by this group through choice—the adoption of ethnic labels, the invention of “traditions,” the consumption of ethnic products, and participation in voluntary societies. The pan-ethnic identities that result demonstrate both a resilient attachment to heritage and a celebration of reinvention.

Lucidly written and enriched with vivid personal accounts, Negotiating Ethnicity is an important contribution to the literature on ethnicity and racialization in contemporary American culture.

AUTHOR BIOGRAPHY
Bandana Purkayastha is an assistant professor of sociology and Asian American studies at the University of Connecticut.
TABLE OF CONTENTS