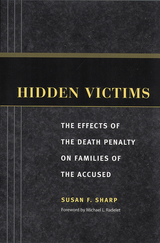 "Sharp’s book reemphasizes the tremendous costs of maintaining the death penalty—costs to real people and real families that ripple throughout generations to come."—Saundra D. Westervelt, author of Shifting the Blame: How Victimization Became a Criminal Defense

"Everyone concerned with the effects of capital punishment must have this book."—Margaret Vandiver, professor, department of criminology and criminal justice, University of Memphis

Murderers, particularly those sentenced to death, are considered by most to be unusually heinous, often sub-human, and entirely different from the rest of us. In Hidden Victims, sociologist Susan F. Sharp challenges this culturally ingrained perspective by reminding us that those individuals facing a death sentence, in addition to being murderers, are brothers or sisters, mothers or fathers, daughters or sons, relatives or friends. Through a series of vivid and in-depth interviews with families of the accused, she demonstrates how the exceptionally severe way in which we view those on death row trickles down to those with whom they are closely connected. Sharp shows how family members and friends—in effect, the indirect victims of the initial crime—experience a profoundly complicated and socially isolating grief process.

Departing from a humanist perspective from which most accounts of victims are told, Sharp makes her case from a sociological standpoint that draws out the parallel experiences and coping mechanisms of these individuals. Chapters focus on responses to sentencing, the particular structure of grieving faced by this population, execution, aftermath, wrongful conviction, family formation after conviction, and the complex situation of individuals related to both the killer and the victim.

Powerful, poignant, and intelligently written, Hidden Victims challenges all of us—regardless of which side of the death penalty you are on—to understand the economic, social, and psychological repercussions that shape the lives of the often forgotten families of death row inmates.

Susan F. Sharp is an associate professor in the department of sociology at the University of Oklahoma. Her research interests have recently explored the impact of criminal justice policies on the families of offenders. Her first book, the edited volume The Incarcerated Woman: Rehabilitative Programming in Women’s Prisons (Prentice-Hall, 2003) focused on the problems of women prisoners and the correctional system response to those problems. She contributed a chapter about mothers in prison for that book, in addition to several articles about the impact of incarceration on children and other family members. In addition to her current interest in the effects of capital punishment, her research has focused on the study of gender, crime, and deviance. She is the 2003-2005 Chair of the Division on Women and Crime of the American Society of Criminology.