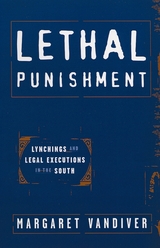 Why did some offenses in the South end in mob lynchings while similar crimes led to legal executions? Why did still other cases have nonlethal outcomes? In this well-researched and timely book, Margaret Vandiver explores the complex relationship between these two forms of lethal punishment, challenging the assumption that executions consistently grew out of-and replaced-lynchings.

Vandiver begins by examining the incidence of these practices in three culturally and geographically distinct southern regions. In rural northwest Tennessee, lynchings outnumbered legal executions by eleven to one and many African Americans were lynched for racial caste offenses rather than for actual crimes. In contrast, in Shelby County, which included the growing city of Memphis, more men were legally executed than lynched. Marion County, Florida, demonstrated a firmly entrenched tradition of lynching for sexual assault that ended in the early 1930s with three legal death sentences in quick succession.

With a critical eye to issues of location, circumstance, history, and race, Vandiver considers the ways that legal and extralegal processes imitated, influenced, and differed from each other. A series of case studies demonstrates a parallel between mock trials that were held by lynch mobs and legal trials that were rushed through the courts and followed by quick executions.

Tying her research to contemporary debates over the death penalty, Vandiver argues that modern death sentences, like lynchings of the past, continue to be influenced by factors of race and place, and sentencing is comparably erratic.

AUTHOR BIOGRAPHY
Margaret Vandiver is a professor in the department of criminology and criminal justice at the University of Memphis.
TABLE OF CONTENTS