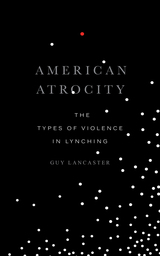 Lynching is often viewed as a narrow form of violence: either the spontaneous act of an angry mob against accused individuals, or a demonstration of white supremacy against an entire population considered subhuman. However, in this new treatise, historian Guy Lancaster exposes the multiple forms of violence hidden beneath the singular label of lynching.

Lancaster, who has written extensively on racial violence, details several lynchings of Blacks by white posses in post-Reconstruction Arkansas. Drawing from the fields of history, philosophy, cognitive science, sociology, and literary theory, and quoting chilling contemporary accounts, he argues that the act of lynching encompasses five distinct but overlapping types of violence. This new framework reveals lynching to be even more of an atrocity than previously understood: that mobs did not disregard the humanity of their victims but rather reveled in it; that they were not simply enacting personal vengeance but manifesting an elite project of subjugation. Lancaster thus clarifies and connects the motives and goals of seemingly isolated lynch mobs, embedding the practice in the ongoing enforcement of white supremacy. By interrogating the substance of lynching, American Atrocity shines new light on both past anti-Black violence and the historical underpinnings of our present moment.

AUTHOR BIOGRAPHY
Guy Lancaster is the editor of the online Encyclopedia of Arkansas, a project of the Central Arkansas Library System, and the editor of the award-winning Bullets and Fire: Lynching and Authority in Arkansas, 1840–1950.
TABLE OF CONTENTS
Contents
Introduction
1. Group
2. Structure
3. Humanism
4. Virtue
5. Scapegoat
Conclusion
Notes
Acknowledgments
Index
REQUEST ACCESSIBLE FILE