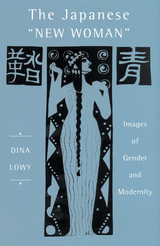 The dawn of the twentieth century in Japan witnessed the rise of a peculiar problem: the “Woman Problem.” This, at least, was the term used in an ongoing debate among the government and various intellectuals over how to define gender roles. While the government worked hard to promote the “good wife, wise mother” paradigm, certain female members of society had other notions about how to engage with their world.

In The Japanese “New Woman,” Dina Lowy focuses on this new female image as it was revealed, discussed, and debated in popular newspapers and magazines in the 1910s, as well as on the lives of a specific group of women—members of the feminist literary organization known as the Seitosha. These women drew on a variety of sources, including Zen training, Western writings and ideas, and Japanese morals and arts as they tried to open up new spaces for female activity beyond the confines of the home. Lowy shows how the Seitosha set a precedent that would be emulated in the decades to follow as Japanese women continued to question the patriarchal order, experiment with alternative visions, and pursue their rights in a variety of forms.  This work also provides a context for comparative studies of New Women, gender debates, and the modernizing process.

AUTHOR BIOGRAPHY
DINA LOWY is an assistant professor of history at Gettysburg College in Pennsylvania.
TABLE OF CONTENTS